The Riverside Energy Efficiency Laboratory is where I worked during graduate school. This is also the facility where my thesis was done. I helped with many interesting projects. 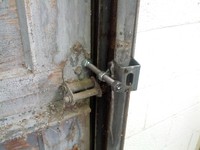 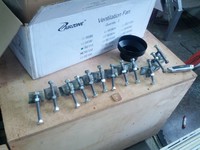 The bay doors at the lab were rattling in the wind, which affected sound tests. The picture shows a part I designed to cure this problem. It consisted of a piece of Unistrut to hook onto the track and a carriage bolt to press into the door. They were easy and fast to mass produce, which allowed us to put many per door. 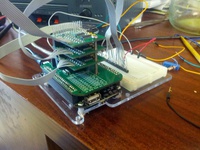 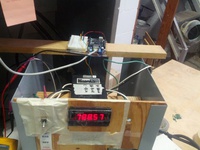 Work got a Beagle Bone black, which was used for reading the sound room fan rpm's to help technician setup the fan. He could read it on his cell phone, because I wrote a full python webpage with websockets. Later the device was used with the analog to digital boards that can be seen stacked on it. Eventually it only had one of the A/D boards and became the Psychometric station, which reads us wet and dry air temperature and barometric pressure. 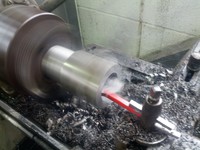 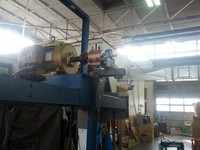 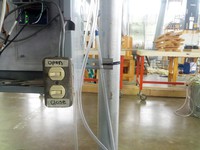 I designed and built these bearing holders, so the dyno could be used on this fan. These bearing holders are fully adjustable and worked very well. They were built to fit on 2 sizes of fan so that I only had to make two rather than four. I bored out and turned down a shaft to convert the fan shafts to the dyno drive shaft. The Torque sensor was having to support the entire weight of the shaft, which was causing vibration problems. I built a bearing support for a pillow block bearing. It is fully adjustable so the bearing can be properly aligned. It cured the vibration problems.

This switch controls the damper for the Figure 13. They really would have liked to have this run by software, but do to the way the program was written and the DAQ was setup it would have taken hours. They also wanted it done immediately, so I just used a double light switch, which satisfied them. 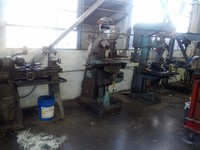 In this picture there is a lathe, mill, two drill presses, and a shop press. The lathe worked when I got there, but the mill needed a little help and the two drill presses were not operational. It didn't take me long to get everything working well. The shop press still needs some love, mainly a gage and some seals. The mill still needs the table removed and worked on, but is usable. Hopefully, I get to this one day and can post pictures. 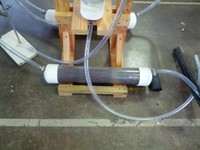 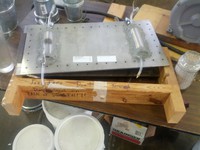 Jennifer Rees and I designed the humidifier, it uses a 4 inch plastic pipe filled with evaporative cooler core. The pipe was filled half way with water and the core wicked the water into the air. The device worked extremely well. There was very little pressure drop across the device and the air was 97% or better humidity. There was condensation in the exit pipe. The other picture shows the membrane holder, which Jennifer designed and built the prototype. We redesigned and built a stainless steel version, which I had to weld up with a MIG welder. The plates could not warp during the welding process and the welds had to be air tight. The wood frame below it was designed and built by me to hold the device vertical. It is extremely simple and worked great.